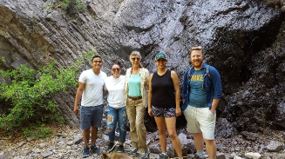 I am so grateful to have had the opportunity to take a three-month sabbatical this year. Between mid-February and Mid-May, I alternated travel with rest and rejuvenation at home.

In Chicago, I visited several organizations that are doing innovative community organizing on issues of housing, immigration and education, including the Logan Square Neighborhood Association (LSNA) and ONE Northside. In New Mexico, I visited NM CaFe, a sister organization of GSOP’s through the Faith In Action Network. I encourage you to check out their websites by following the above links. In Puerto Rico, I studied Spanish and learned about the heritage of the people of this beautiful island.

In many ways my trip to Las Cruces, which included a trip to the U. S. /Mexico border, was the most powerful part of my sabbatical. First, there is already a wall along much of the border. This wall has separated communities and is impacting wildlife migration patterns. This wall would be replaced by a larger wall, which will have even more severe impacts.

While I was at the wall outside of El Paso, President Trump ordered a suspension of Environmental Protection Agency rules to try to force construction of a wall across the New Mexico border. I was interviewed by a local TV station about the differences between the southern border and the northern border (NH/Canada) and the wisdom (or lack thereof) of suspending environmental regulations.

I also attended a conference called Life on the Boarder: Wildlife, Walls and Water. In addition to learning about four species of feline that live in the border region, I learned about the ways that the area around border has transitioned from being a part of Mexico to being a part of the U.S. and back again in ways that are very disruptive to communities and families. I also witnessed the impact of the current administration’s focus on “border security”, which has actually hurt trade and hurt workers as entry points have become backed up with traffic and red tape.

While at home, I played the piano, sewed and cleaned out the garage! And I read, read and read. I really recommend “The Line Becomes a River”, by Francisco Cantu about his experience as a border patrol agent, “You’re More Powerful Than You think” by Eric Liu, a great handbook for effective civic action, and “Unexpected News: Reading the Bible Through Third World Eyes”, by Robert McAfee Brown. Feel free to contact me for more recommendations or to discuss any of these readings.

I am back at GSOP filled with ideas and hopes for making our work together for racial and economic justice in New Hampshire stronger and more powerful than ever. I saw groups like ours using art, music, and cultural activities in their work for justice. I saw groups like ours with regular year-round schedules of leadership training for members and professional development days for staff.

Perhaps most striking, I saw grassroots groups like ours developing sophisticated communications strategies and working on shifting the narratives in their communities. To craft and share these messages that shift the dominant narrative, we must move beyond the HOW of building power (though that is an essential step) and arrive together at the WHY we build power.

We all know, at some level, how important it is to identify and keep our eye on the reason we do the work we do. We all know how important it is to remember our “big picture” reason even while we’re working on all the smaller steps it takes to get there. And we all know that it is easy to get distracted from the purpose of our work by the steps it takes to achieve it. Having a “North Star” to guide us helps us stay on track.

Coming back from three months away from the detail that absorbs so much of our time, I am excited to think with each of you about what your big picture goals are … and to think together about what North Stars guide GSOP’s work.

I look forward to the chance to talk with each of you about your vision for the best community we can be and ways that we can collaborate to make those visions real!